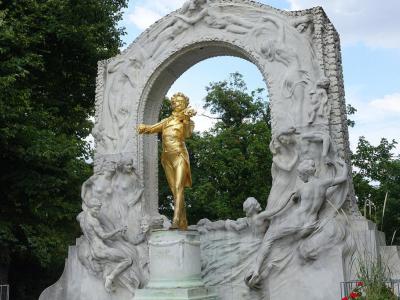 The gilded bronze tribute to the Waltz King is easily one of the most known and most frequently photographed monuments in Vienna – including after dark when beautifully illuminated. Compared to the many traditional 19th-century-style statues at Stadtpark, this certainly is a more playful, elegant and interesting composition to view. Framed by a marble relief made by founding member of the Vienna Secession, Edmund Hellmer, it was unveiled to the public on 26 June 1921.

The statue is located right behind the opulent Kursalon concert hall where Strauss Jr. gave his first concert on 15 October 1868, turning it into a popular place for concerts and for dancing ever since. After undergoing some renovation, the Kursalon is still used for balls and waltz concerts where one can hear the composer's music.