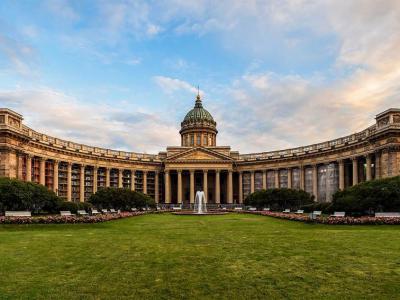 The architect Andrey Voronikhin modeled the building on St. Peter's Basilica in Rome despite strong opposition from the church authorities who disliked the idea of replicating a Catholic basilica in Russia's then capital. The construction started in 1801 and lasted ten years.

Many leading Russian artists of the day contributed to the design, producing the interior grand with arched ceilings and ornate carvings, and numerous columns echoing the majestic exterior colonnade reminiscent of a palatial hall – 69 meters long and 62 meters high. In addition to the spectacular stone colonnade accented with gold, the cathedral's exterior features a small fountain encircled by a garden and a wrought-iron grille separating it from a small square. The cathedral's huge bronze doors were copied from the doors of the Baptistery in Florence, Italy.

The Kazan Cathedral became a symbol of and a memorial to the Russian victory in the Patriotic War of 1812. When Napoleon invaded the country, the Russian commander-in-chief General Mikhail Kutuzov sought divine help from Our Lady of Kazan. In 1813, he himself was interred in the cathedral. After the war, in 1815, keys to 17 cities and eight fortresses brought from Europe by the victorious Russian army were placed inside the cathedral's sacristy. In 1837, Boris Orlovsky designed two bronze statues – of Kutuzov and Barclay de Tolly – standing out front.

In January 1932 the authorities closed the cathedral and reopened it in November as the pro-Marxist "Museum of the History of Religion and Atheism". Religious services resumed in 1992, and four years later the cathedral was returned to the Russian Orthodox Church. As of 2017 it functions as the mother cathedral of the metropolis of St. Petersburg.

Why You Should Visit:
For anyone who hasn't been inside an active Eastern Orthodox Church, this is recommended as worshipers abound and the building's architecture is something truly admirable.

Tip:
Try to visit during a service (6 pm) and focus on the service and voices of the quire to get a better feel for the soul of the country and Russian people.
Majestic during the day, the cathedral is exceptionally spectacular at night.