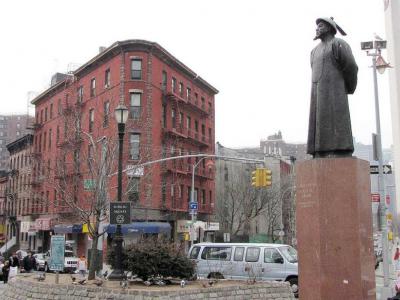 New York's "Little China" has been growing slowly but steadily over the years, both towards the Manhattan Bridge and further east towards an area whose heart is undoubtedly the Kimlau Square, standing at a labyrinthine intersection where eight streets converge. On the square's pedestrian island stands the Kim Lau Arch, named for a Chinese-American aircraft commander who grew up in NYC and died a hero in WWII but dedicated to the memory of all the Chinese who had served the nation, going back to the workers who helped build the railroads that cross the country from east to west.

Nearby is a monument to Lin Zexu, a Qing Dynasty statesman who ardently defended the urgent need to restrict drug trafficking, combat British colonialism in China and stop once and for all the growing opium addiction of the Chinese people (apparently he succeeded, but at the cost of unleashing the First Opium War of 1839-42). A New York Times article from 1997 reported that "Those who brought the Lin statue to Chatham Square say they did so to deliver a strong anti-drug message. But the statue carries a strong political message as well: it underscores the ascending power in Chinatown of immigrants from mainland China, particularly the Fujianese. They are quickly gaining political strength, at the expense of the pro-Taiwan Cantonese who settled earlier in Chinatown."

East of the Square, on Division St, is Confucius Plaza, a 1970s housing complex that still ranks as some of the best living quarters in Chinatown. A bronze statue to honor the Chinese philosopher was raised in 1976, serving as an inspiration and important meeting place for the whole community.
Image Courtesy of Wikimedia and LuHungnguong.