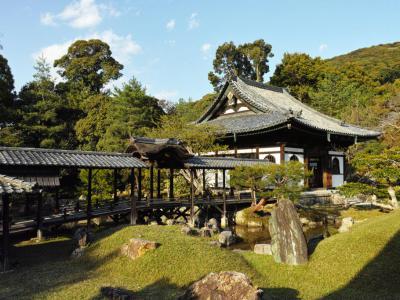 The Kodai-ji Temple was built in 1606 in memory of the spirit of the Samurai warlord Hideyoshi Toyotomi by his grieving widow, Nene. It is famous for the Maki-e paintings that cover the walls of the Spirit Hall.

The temple was built using the funds donated by Tokugawa Ieyasu, the first Tokugawa Shogun, who was a vassal of the Samurai warlord Hideyoshi Toyotomi. Nene, the wife of Hideyoshi, became a Buddhist nun after the death of her husband. The temple complex suffered damage by fire in 1798 and only two of the original structures have survived.

Managed by monks from the Rinzai School of Zen Buddhism, the Kodai-ji temple has many of its structures and objects declared Important Cultural Assets. These include the main gate from 1606 and the Spirit Hall. The Maki-e paintings in the Spirit Hall are worked with gold and lacquer. A notable painting is a well-preserved portrait of Hideyoshi Toyotomi. Another notable feature is a bronze bell that dates back to 1606. The temple is surrounded by beautifully landscaped gardens with gravel paths and a bamboo grove. Within the garden there are tea houses designed by contemporary Japanese artists. The gardens are illuminated every autumn between late October and early December, and visitors flock here regularly to enjoy the tranquil, aesthetically lighted garden and the spectacular night views of Kyoto opening from the temple.

Why You Should Visit:
This temple is a summary of Kyoto: a Zen garden, a worship hall, a couple of tea ceremony rooms, a bamboo forest, a beautiful garden, and two memorial halls.
The garden surrounding the temple is kept to perfection – each stone is meaningfully placed in its location.
Every aspect of this temple is blended in so well and worth spending a whole day exploring!
It is also interesting to explore the street around the temple to feel Kyoto's ancient atmosphere.

Tip:
Admission includes access to a small associated museum located down the hill, by the Path of Nene, and across the street from the temple itself.
Prepare to climb many stairs up just to get to the temple; once inside, you'll have to do another climb up the mountain.