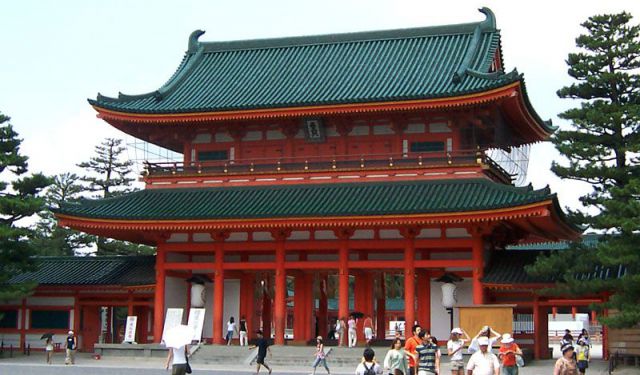 The former capital of Japan, Kyoto is the city of tradition, history and culture. Attesting to this is the central part of the city, replete with historic attractions – centuries-old imperial palaces, castles and shrines that have seen a lot in the turbulent past of Kyoto. The explore the most prominent of them and to feel the breath of antiquity, follow this self-guided walk.
Image Courtesy of Wikimedia and Chris Gladis from Kyoto, Japan.
How it works: Download the app "GPSmyCity: Walks in 1K+ Cities" from iTunes App Store or Google Play to your mobile phone or tablet. The app turns your mobile device into a personal tour guide and its built-in GPS navigation functions guide you from one tour stop to next. The app works offline, so no data plan is needed when traveling abroad.

The magnificent Nijo Castle is the former residence of the Tokugawa Shogunate. Opened to the public in 1940, this is one of the few palaces in Kyoto where visitors are allowed to view the interiors.

The castle was built in 1603 by Tokugawa Ieyasu, and was later enlarged by his descendant, Tokugawa Iemitsu, who added a five-floored tower, called Honmaru, which was later destroyed by fire. Nijo was also the site where the last Tokugawa Shogun, Yoshinobu, restored to power Japanese Emperor in 1867.

Unlike other palaces, the Nijo Castle is not fortified but, instead, is surrounded by gardens and a moat. The complex comprises two structures: the outer Honmaru tower, and the main building and residence of the Shogun, called Ninomaru. The unique feature of Ninomaru is its squeaking floors, aka “nightingale floors” (uguisubari). The noise made by the floor planks, when walked upon, was to warn residents about someone entering the building. The interiors of the castle abound in beautiful paintings and sliding doors. There are also wax mannequins dressed up in ancient costumes so as to recreate the ambiance of a historical royal residence. In 1994, the Nijo Castle was declared a UNESCO World Heritage Site.

Why You Should Visit:
To experience first-hand the Shogun's lifestyle, to see where official ceremonies and meetings took place, and so on.
Truly amazing gardens outside, with a tea-house and an indoor food/drink/souvenir rest area.

Tip:
Make sure to wear socks, as you will be required to take your shoes off to explore the interior.
Consider renting audio guide headphones for some valuable info that will help you understand the history of the complex better.
Otherwise, consider joining the English language tour running daily at 10am and 12:30pm.

Opening Hours:
Daily: 8:45am-5pm (admission until 4pm); entry to Ninomaru from 9am-4pm
Closed: Tuesdays in Jan, Jul, Aug, Dec (or the following day if Tuesday is a national holiday), Dec 29-31


Image Courtesy of Wikimedia and Reggaeman.
2

The Kyoto Imperial Palace is the former residence of the Japanese Emperors that was in use before the country's capital was moved to Tokyo. This is also the venue where the enthronement of the Emperors took place until recently.

The present palace was built in 1855 after a devastating fire had completely destroyed its predecessor. The design features the palatial style of the Heian period. The complex buildings include Dairi – the Imperial Residence, Sento – the palace of the retired Emperor, a library, several ceremonial halls, the Kaninnomiya Mansion – residence of the Fujiwara nobility, and houses for the Empress and other high-ranking officials.

The Kyoto Imperial Palace is surrounded by a long earthen wall, called Tsuji, with six ancient gates, and is encompassed by a green space of Kyōto Gyoen – the Kyoto Imperial Park. The park is well manicured, has gravel paths, lawns and many shady trees. In the northwestern corner of the park is the Konoe Pond surrounded with cherry trees that bloom between March and April. The palace is managed by the Imperial Household Agency.

Why You Should Visit:
While not allowed inside the buildings, you are free to explore the grounds of the inner and outer gardens.
Restrooms are available on the site and there's a common sitting area with free Wi-Fi.

Tip:
Make sure to join one of the free guided one-hour tours (English/Japanese) at either 10am or 2pm, covering the history, architecture, and trivia of the site.
Reservations for the tour can be made at the visitor center in the NE corner of the park.
Alternatively, download the app to your smartphone for the tour – very easy, convenient and cheap.

The Sento Imperial Palace once served as residence for the retired emperors, and was originally built in 1630 for Emperor Go-Mizunoo. The nearby Omiya Palace was built in 1867 for Empress Dowager Eishō. It later became a retirement residence for all the subsequent Emperors of Japan. Both palaces were burned down and rebuilt several times. After a devastating fire in 1854, the Sento Palace was never rebuilt, while the Omiya Palace was rebuilt and still remains the Kyoto residence of the Imperial family.

The area around Sento Palace is taken by an extensive 22-acre garden encircled by an ancient mud wall. Visitors to the garden pass through a large wooden gate. The garden's main feature is a large pond with islands, bridges and walkways. The southern part of the pond has a beautifully landscaped shore covered in round and square peddles and planted with cherry trees. On the western side of the pond there are two tea houses. One of them, called Seikai Te, has a shingled roof, while the other – Yushin-Tei – has a thatched roof and a unique round window.
Image Courtesy of Wikimedia and Daderot.
4

The Rozan-ji Temple is located to the East of the Imperial Palace in Kyoto on the site of a former mansion that belonged to the father of Murasaki Shikibu, a noblewoman who went down in history as the author of the epic 11th century novel, The Tale of Genji. Many visitors come here regularly to pay homage to Lady Murasaki.

The temple was constructed in the year 938 on a hill, called Funaokayama, by the Buddhist priest Ganzan Daishi. In 1571, many of the local temples were burned down by the warlord Oda Nobunaga. Unlike those unfortunate ones, the Rozan-ji temple escaped destruction. Emperor Kokaku commissioned its expansion and the work at its present site started soon after.

Today, Rozan-ji is the final resting place of numerous princes, princesses and other prominent personalities from the Edo period. Among them is Jocho Busshi, the renowned Heian-era sculptor, maker of Buddhist statuary. Fronting the temple is a small moss and gravel garden with beautiful bellflower plants. The Day of Setsubun, a traditional annual court ceremony of driving out demons, is performed here on the 2nd and 3rd of February.

Shimogamo-Jinja is one of the oldest shrines in Kyoto and one of the 17 monuments in the old city declared World Heritage Sites by the UNESCO.

The shrine dates back to the 6th century and was originally constructed to protect the city of Kyoto. It is located within a forest, called Tadasu no Mori (the “Forest of Truth”), and is dedicated to the deities Kamotaketsunumi-no-Mikoto and his daughter Tamayorihime-no-Mikoto, as well as to the God of Fire and Thunder, Honoikazuchi-no-Mikoto. The shrine received imperial patronage during the Haien Era and from 1871 to 1946, being a Kanpei-Taisha or government-supported shrine of the first rank.

Shimogamo-Jinja is famous for the annual Aoi Matsuri (“Hollyhock”) Festival that takes place on May 15th. It is also the site of an annual New Year Ritual, called Kemari Hajime. Kemari is a traditional Japanese sport originated in the Haien Era. It had almost disappeared after the Meiji Restoration but was revived by the efforts of the Kemari Preservation Society in 1903. The Tadasu no Mori surrounding the shrine is a green oasis of tranquility amid the bustling metropolis. The park has many ancient and beautiful trees, is crisscrossed by clear streams, and has been regarded as an important Haien-era botanical garden.

Why You Should Visit:
The shrine itself is not big, but the surrounding it park-like area offers a pleasant respite in the shade of old trees.
The tall bamboo is peaceful and a very nice alternative to the usually crowded bamboo grove in Arashiyama.

Tip:
Any festival held here has some interesting traditions to it, so it's probably best to visit here with a knowledgeable guide to explain them.