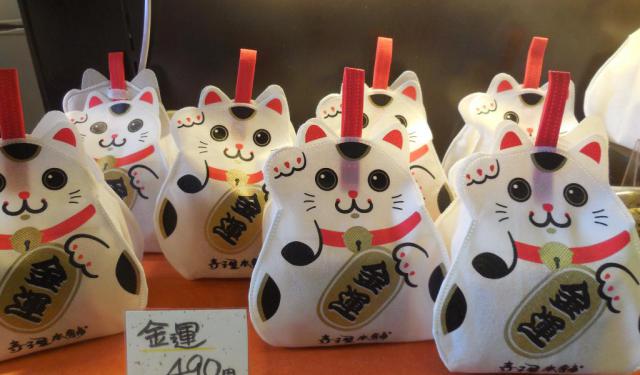 The cultural capital of Japan, Kyoto is just as famous as a shopper’s paradise and is, without saying, the best place in the country to buy traditional and modern Japanese goods. Souvenirs, food, bargains and various “one-of-a-kind items” are all up for grabs here. If you would like to walk around Kyoto on your own two feet and enjoy shopping and authentic Japanese cooking, follow this self-guided walk to some of the top shopping spots and food markets in the city.
Image Courtesy of Flickr and u dou.
How it works: Download the app "GPSmyCity: Walks in 1K+ Cities" from iTunes App Store or Google Play to your mobile phone or tablet. The app turns your mobile device into a personal tour guide and its built-in GPS navigation functions guide you from one tour stop to next. The app works offline, so no data plan is needed when traveling abroad.

The Nishiki market was established in 1310 as a large wholesale venue. Just like the rest of the city, it suffered greatly during the Ōnin Civil War in the 1500s. After the war, the shogun Toyotomi Hideyoshi reopened it again, this time as a retail market for food and groceries, which has since proven extremely popular.

Most vendors at Nishiki allow customers to sample their products before buying. Some specialty stores run small eateries serving the same specialty fare sold by the store. Most shops in the market are closed on Wednesdays, except the fishmongers. The latter have their day off on Sundays. Besides the fresh produce and seafood, there are stores selling knives, crockery and cookware. The Nishiki market is frequented by the locals looking for authentic stuff, much as by the guests of the city coming to enjoy the atmosphere of a traditional Japanese marketplace.

Why You Should Visit:
A little bit touristy, but still authentic; you can find any local delicacy here – pickled vegetables, eel, uni, sashimi, takoyaki, matcha ice cream, etc.
Good for tourists who want to see what a typical Japanese arcade shopping market looks like, although it's not the only one in the area.

Tip:
The market has a NO WALK AND EAT policy, meaning you can't buy food to eat while walking.
You can only eat standing in the front of the stall or take it away outside the market boundary.
If you see a line for something, make sure to stop and see what it is. Chances are it is something pretty good.
Beware of the higher prices on special items and gifts, though, as it is a popular tourist spot.

Right in the middle of downtown Kyoto, running parallel to Teramachi street to the east, from Sanjo-dori to Shijo-dori, is another popular covered pedestrian arcade – Shinkyogoku. Together these two streets form the heart of the city's main shopping district. Shinkyogoku offers a great deal of things to choose from befitting every wallet or purse, whether you look for souvenirs and kitsch or seek to scope out a massive food court.

Compared to Teramachi, this shopping venue is for the young and the restless, and is lined with specialty stores filled to the brim with tacky souvenirs of almost every description, shoes, umbrellas, T-shirts, yukata (casual summer kimono), confectionery, character goods, and more. The things on sale here are cheaper and more to the liking of teens, therefore this place is usually packed with high-school and university students, as well as kids out on school excursions. Those who like to do their shopping whilst chomping down on some snacks, will find themselves at home in Shinkyogoku as there are many restaurants and cafes sprung up here lately accommodating the increasing demand for street food.

Other than fresh fare, Shinkyogoku is also a hub for fast fashion fixes. Trends-in-the-making can be spotted here in the tall windows of several one-of-a-kind stores featuring local labels and modish boutiques.

What to buy here:
Geta – traditional Japanese footwear made of one piece of solid wood with two wooden blocks underneath and a fabric thong. Resembling a mix of clogs and flip-flops, Geta were the most used type of footwear in Japan before shoes came into fashion. Nowadays, it is worn with traditional Japanese clothing, such as kimono or yukata, as well as with Western clothing during summer. There are several styles of Geta differing in shape and design.

Why You Should Visit:
A good variety of shops with some locally made items that are perfect for souvenirs. Between arcades, outdoor concert spaces, mega department stores and small shops, enchanting cafes and restaurants, and a movie complex – this place really does have something for everyone.
If you need a shirt that reads “Ichi-ban” (Number One), Shinkyogoku is the place to go.
Great spot for wandering and there is actually a temple on this street too that you can spend a few minutes checking out.

Tip:
The street is covered so it’s a perfect hideaway when it rains; ideal for food, coffee, and nightlife. The local crepes make for a great snack in the afternoon. Very delicious!
Some online sources say it is open till 9 or 10 pm, but in reality it starts closing around 7 or 8 pm. Nothing really stays open too late around this area in Kyoto.
Make sure to walk up and down the different blocks to find something new around each bend.
Image Courtesy of Flickr and Zachary Smith.
3

Daimaru is a long-standing department store – one of Kyoto’s largest and most opulent – which has been loved by many generations of the locals for its closeness to the daily life of the people. Daimaru is renowned for its impeccable service, a nice lineup of products, and one of the best food courts in the country, reasonably priced and representative of Kyoto-style Japanese cooking, fit to make anyone give up any thoughts of dieting.

Whether you’re after a tailor-made suit, high fashion or luxury outfits or some casual sportswear, be it for men, women or kids, or perhaps some cosmetics and accessories, or premium quality groceries, fresh food, fruits or alcohol, Daimaru is a great place to look. Fully stocked with all these items, this store is ideal for shopping with a whole family.

For foreign tourists' convenience, there is a customer service on the 7th floor assisting with the tax-free formalities, plus an English floor map, free Wi-Fi and a foreign exchange machine conveniently placed next to the information desk. Also, if you are carrying a lot, you may use the free hand luggage safekeeping service on the 1st floor.

Tip:
Keep in mind that tall Westerners may be out of luck when shopping for shoes, pants or shirts.
Image Courtesy of Wikimedia and Unknown.
4

Shijo-dori or the “Fourth Avenue of Heian-kyō” (one of the several former names of Kyoto, the ancient capital of Japan), is a fabulous street that runs East to West through the heart of the city. This street has everything, from high-end shopping to restaurants to stores selling traditional Japanese handcrafted products, and as such is fit to satisfy every taste.

Shijo-dori is very long and very clean, with lots of sidewalks, lamps, signage, and even a small Yasaka Shrine at its eastern end, marking the entry point to Gion district. Originally quite narrow, it was expanded in 2015, making it much easier to walk through. Covered by awnings on both sides, the street is just a delight to stroll from one end to the other, even if not shopping, no matter if it's raining or scorching hot, attesting to which is a regular crowd of international and domestic tourists.

The busiest part of Shijo-dori is roughly between Karasuma-dori on the West (business and banking district) and Higashioji-dori on the East (gateway to the Yasaka Shrine). The bulk of shops is concentrated between Kawaramachi-dori and Karasuma-dori and includes some well-established department stores like Daimaru and Takashimaya, boutique shopping buildings Fujii Daimaru and Marui, along with everything else, from fashion to Kyoto-style clothing (Kimono) to small drug stores and retail shops selling teas, confections and dolls, to cafes to fast food and Japanese cuisine outlets, to everything else imaginable.

North of Kawaramachi Station there is a Book Off Plus which sells books, CDs, DVDs, as well as used clothing, plus carries a huge collection of Japanese anime figures, gundam, model trains, etc. The most interesting and less hectic part of Shijo Street is across the Kamo River and starting from the Shijo Bridge east to the Yasaka Shrine, featuring an array of shops selling traditional goods and modern products with a Japanese twist.

Tip:
Overall, this area seems more like an adult's paradise for couples and groups of friends, and less so for the kids to run around. An interesting look at modern-day Kyoto.
Make sure to look past the arcade at the side streets with narrow buildings that have been around since the 1960s. From Kawaramachi-dori to the east, the experience becomes more and more Japanese with food stalls and souvenir shops.
Image Courtesy of Flickr and oonnuuoo.