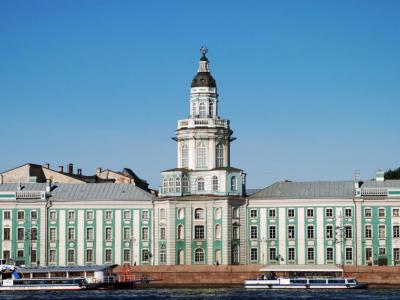 A place for the scientifically curious, the Kunstkamera (aka the Museum of Anthropology and Ethnography) was founded by Peter the Great in 1704 to preserve "natural and human curiosities and rarities" in a bid to acquire full knowledge of the world.

The Kunstkamera building was designed by Georg Johann Mattarnovy and completed in 1727.

Over 2,000,000 items make up the museum collection: anatomical specimens, preserved animals and human fetuses, body parts, and other curiosities. One of the more bizarre displays is the head of Willem Mons, who was executed for embezzlement by Peter the Great.

Peter encouraged the research of deformities all along trying to debunk the superstitious fear of monsters that was widespread throughout Russia at that time. He issued a decree ordering malformed, still-born infants to be sent from all over the country to the imperial collection, and subsequently had them showcased in the Kunstkamera as examples of accidents of nature. The Emperor thus laid the foundation for creating the institutions that produced leading scientists of the day.

A must-see is the photo collection featuring prints, glass plates, negative and positive films, postcards, and sketches from the past to the present. The museum also contains a display of coins and other artifacts from around the world. Visitors must have special permission to videotape or photograph and are not allowed to touch the exhibits.

Why You Should Visit:
While the museum is probably most famous for its First Scientific Collection, don't miss the opportunity to view the amazing collection of original ethnic items from around the globe, ranging from the Eskimos to Africans.

Tip:
The display of malformed human and animal fetuses on the top floor may not be suitable for young children or the fainthearted.