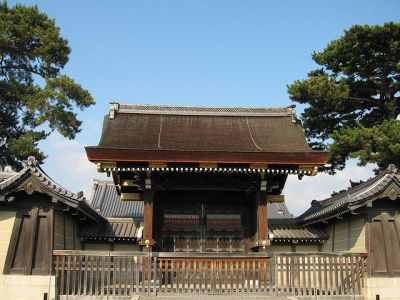 The Kyoto Imperial Palace is the former residence of the Japanese Emperors that was in use before the country's capital was moved to Tokyo. This is also the venue where the enthronement of the Emperors took place until recently.

The present palace was built in 1855 after a devastating fire had completely destroyed its predecessor. The design features the palatial style of the Heian period. The complex buildings include Dairi – the Imperial Residence, Sento – the palace of the retired Emperor, a library, several ceremonial halls, the Kaninnomiya Mansion – residence of the Fujiwara nobility, and houses for the Empress and other high-ranking officials.

The Kyoto Imperial Palace is surrounded by a long earthen wall, called Tsuji, with six ancient gates, and is encompassed by a green space of Kyōto Gyoen – the Kyoto Imperial Park. The park is well manicured, has gravel paths, lawns and many shady trees. In the northwestern corner of the park is the Konoe Pond surrounded with cherry trees that bloom between March and April. The palace is managed by the Imperial Household Agency.

Why You Should Visit:
While not allowed inside the buildings, you are free to explore the grounds of the inner and outer gardens.
Restrooms are available on the site and there's a common sitting area with free Wi-Fi.

Tip:
Make sure to join one of the free guided one-hour tours (English/Japanese) at either 10am or 2pm, covering the history, architecture, and trivia of the site.
Reservations for the tour can be made at the visitor center in the NE corner of the park.
Alternatively, download the app to your smartphone for the tour – very easy, convenient and cheap.