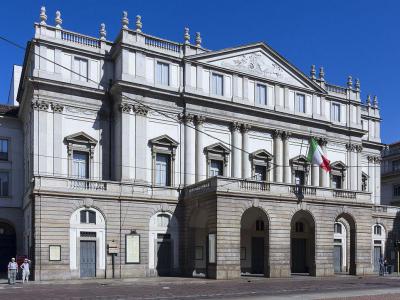 Home to the La Scala Theatre Chorus, Ballet and Orchestra, this is one of the top musical theatres on the planet. Since its inauguration in 1778, the famed opera house in Milan has hosted some of, if not all, the finest singers of Italy and the entire world.

After its predecessor, the Teatro Regio Ducale, was destroyed by fire in 1776, a replacement one had to be built on the former site of the church of Santa Maria alla Scala, from which the new theatre got its name. Building expenses were covered from the sales of theatrical boxes. The latter were lavishly decorated for their owners, and produced quite an impression upon guests, including some prominent ones, like the French author Stendhal. Soon, La Scala became a preeminent meeting place for the high society. In keeping with the then tradition, the main floor had no chairs and spectators had to watch the shows standing up. The orchestra was in full sight either, as the orchestra pit had not been built yet.

Badly damaged by bombing during World War II, La Scala reopened, after a thorough restoration, in 1946. To celebrate the occasion, Arturo Toscanini arranged an unforgettable concert, featuring a sensational solo by Renata Tebaldi. In 2002-2004 the theatre underwent another major overhaul. Contrary to its rather plain façade, the La Scala interior is quite exquisite – beautifully traditional and far more intimate than that of opera houses in New York and London.

Why You Should Visit:
The La Scala Orchestra, made up of 135 musicians, is currently one of the world’s greatest orchestras for opera productions, renowned for its ability to attain a uniform and distinguished sound. The theater is also acclaimed internationally for its symphonic activity. The La Scala museum possesses one of the richest and most envied music-themed collections in the world. A tour of the theatre offers a rare opportunity to sit down in its most prominent box and take photos.

Tip:
Do not buy second-row balcony tickets, unless you are very tall.
After 6pm, they sell out same-day tickets at a huge discount.
Image by Jean-Christophe BENOIST on Wikimedia under Creative Commons License.