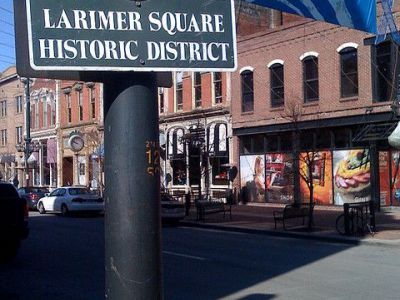 Larimer Square is billed as the most historic block in Denver because it was the first settled part in the city. Originally, the block was settled by Green Russell in what he called Auraria. In 1860 it was incorporated into Denver with the street named after the first person to build a home in Denver, General Larimer.

The buildings around the square are now filled with restaurants, shopping and nightlife. Many of the buildings originally had very different purposes. Tourists can explore the current-day interiors and exteriors while thinking of days gone by.

Larimer Square is close to the 16th Street Mall. Indeed, it is close enough that both could easily be visited on the same walking tour. Visitors will find more dining establishments and retail shops at Larimer Square, but they will also find special events that are unique to that area. Look for block parties that regularly occur and live music that can be found almost every night of the week.

The square is conveniently located near a number of performing arts venues. Those who want to take in a show may want to plan a visit to Larimer Square early in the evening so that they can then head to the Robert and Judi Newman Center and the Denver Center for the Performing Arts, the Buell Theatre or the Garner Galleria Theatre, among others.

Why You Should Visit
History buffs should not let a visit to Denver pass by without seeing this first settled area in the city. It may not be as solitary as it was in 1858, but it still holds the charm of California's gold rush.

Tips
Visitors should take their time when exploring Larimer Square. There are treasures to be found around every corner.
Image Courtesy of Flickr and DenverDwellings.