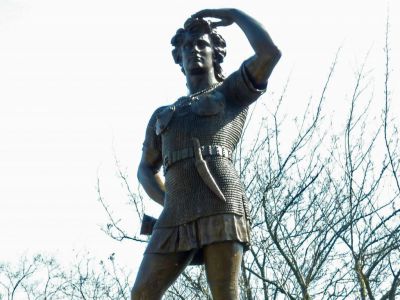 Leif Erikson, Leiv Eiriksson or Leif Ericson[note 1] (c. 970 – c. 1020) was a Norse explorer from Iceland. He is thought to have been the first known European to have set foot on continental North America (excluding Greenland), approximately half a millennium before Christopher Columbus. According to the sagas of Icelanders, he established a Norse settlement at Vinland, which is usually interpreted as being coastal North America.

There is ongoing speculation that the settlement made by Leif and his crew corresponds to the remains of a Norse settlement found in Newfoundland, Canada, called L'Anse aux Meadows and which was occupied c. 1000. Later archaeological evidence suggests that Vinland may have been the areas around the Gulf of St. Lawrence and that the L'Anse aux Meadows site was a ship repair station.

Shading his eyes to scan the distance, Leif Ericson stands on a large red sandstone pedestal. Unlike other depictions of Ericson, here he is youthful and clean-shaven. He wears a scale armor shirt, ornamented with breast plates and a studded belt. Underneath, he wears a tunic and leggings with leather sandals. He carries a powder horn over his shoulder and a knife in a decorative sheath at his side. On the sandstone base, the inscription reads, Leif, the discoverer/ son of Erik/ who sailed from Iceland/ and landed on this continent/ A.D. 1000. In runic letters, it also reads, Leif, son of Erik the Red.
Image Courtesy of Wikimedia and James Steakley.
Sight description based on Wikipedia.