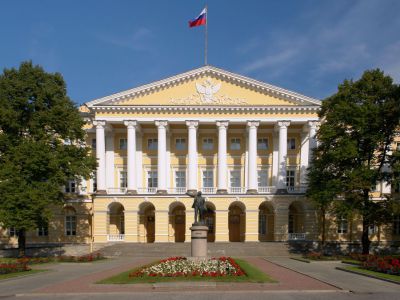 The Lenin Memorial Museum in the Smolny Institute complex, formerly known as the Smolny Institute for Noble Maidens, is one of the few Lenin museums still in existence. Designed by Giacomo Quarenghi, the building dates back to 1806-1808 and originally housed the country's first state-owned educational institution for women in which young girls were trained to become ladies. The Institute remained in this location until the summer of 1917.

Soon after that it accommodated headquarters of an armed uprising and, upon the seizure of power by the Bolsheviks, the seat of the first Soviet government. Immediately before and during the October Revolution of 1917, Lenin established here a temporary residence. He stayed at the Smolny for several months until the national government moved to the Moscow Kremlin in March 1918.

In 1927, a statue of Lenin was erected in front of the building, designed by the sculptor Vasily Kozlov and architects Vladimir Shchuko and Vladimir Gelfreikh. That same year, a museum was set up in the room occupied by Vladimir Lenin and Nadezhda Krupskaya at the Smolny from November 10, 1917 to March 10, 1918. The furnishings represented the interior of the Institute Inspector's room, preserved practically unchanged.

In 1974, the exposition was expanded to include Lenin's study, featuring the original belongings of both Lenin and Krupskaya. In 1991, the Smolny became the seat of a St. Petersburg mayor and the city government.

The museum in its current form emerged in 1992. The Smolny Photo/Document Exhibit, First Soviet Government Exhibit, and Days of the Siege Exhibit are some of the displays presented here today. Visitors will also see Lenin’s office and living quarters, the assembly hall in which Lenin spoke, as well as the former school for the girls.

An average of 62,000 people visit the museum every year.
Image Courtesy of Wikimedia and George Shuklin.
Sight description based on Wikipedia.