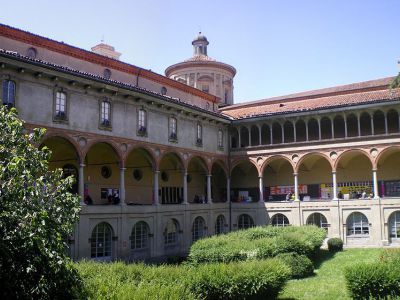 The Museo nazionale della Scienza e della Tecnologia "Leonardo da Vinci" in Milan is the largest science and technology museum in Italy, and is dedicated to the Italian painter and scientist Leonardo da Vinci. Opened on 5 February 1953, the museum is housed in the ancient monastery of San Vittore al Corpo of Milan. Its collection is divided into seven main departments, namely: Materials, Transport, Energy, Communication Leonardo da Vinci, Art & Science, New Frontiers, and Science for Young People. Each of these departments has a laboratory for children and young students. The Transport section is made up of four different parts, such as Air, Rail, Water and Submarine Enrico Toti-S-506.

One of the most popular sections within the museum is, undoubtedly, the Leonardo da Vinci, Art & Science area, and it is made up of four parts. The Jewelry collection displays objects made of gems and precious metals, including gold, as well as ivory. The Leonardo da Vinci section exhibits the machines reproduced from Da Vinci's drawings, such as a hydraulic saw, a spinning machine, a flying machine and the so-called Leonardo’s Tank. The exhibited models are the fruit of the reinterpretation by a group of experts who have translated and completed the drawings. The Horology collection illustrates the evolution of watchmaking by showing several pendulums, ancient clocks, personal watches and tower mechanisms. The Musical Instruments section exhibits instruments from the 17th to 20th centuries. A reconstruction of a lutemaker’s workshop from the 17th century is also exposed in this part of the museum.
Image by Pietrodn on Wikimedia under Creative Commons License.
Sight description based on wikipedia