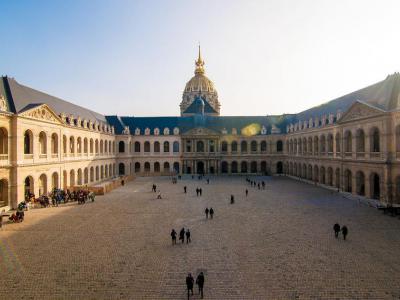 Les Invalides is a spacious block of buildings in Paris comprising museums and monuments showcasing the military glory of France. It also played a significant role in the storming of the Bastille as the source of weapons for the mob who attacked the fortress on 14 July 1789. Originally designed as a hospital and retirement home for the aged and sick war veterans, the complex had 15 courtyards, with the largest one reserved for military parades. Completed in the 17th century, the hospital once housed up to 4,000 war veterans at a time. Some of France's greatest generals and war heroes, including Napoleon Bonaparte himself, are buried here.

The tomb of Napoleon in the Royal Chapel is a standalone attraction and is a typically French interpretation of Baroque, with a huge dome, inspired by St. Peter’s Basilica in Rome. The inner part of the dome is a sample of the French mastery in decorative arts, working on which was the army of painters and craftsmen. The sheer size of the dome, and that of the sarcophagus beneath it, vividly demonstrate the importance of Napoleon to the French people. If you come late, toward the closing hours, you may have a bit more space to walk around and explore this place on your own.

The three museums within the complex include the Army Museum, the Museum of Military Models, and the Contemporary History Museum. Of these, the Army Museum is the largest. It recounts France's military history starting from the early Middle Ages until the Second World War including, of course, the Napoleonic wars, displaying weaponry, uniforms, and maps originating both in the Western world and the Orient including Turkey, China, Japan, and India.

Why You Should Visit:
From Napoleon's campaigns to the world wars, it is all there for you to see. The exhibits cover not just the military aspects of the wars, but also their economic, social and political aspects, their causes and the aftermath. Then, to top it all off, there is the tomb of Napoleon.

Tip:
The available on-site Angelina patisserie offers visitors a fairly good selection of teas and cakes, ideal for a quick snack and a nice break whenever one might need it.