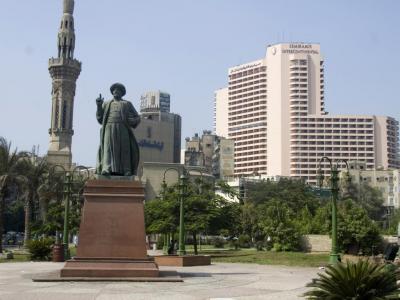 The Liberation Square or Tahrir Square is the main gathering place for protests and events in Cairo. It was the scene of eight continuous days of protests where the people of Egypt forced President Hosni Mubarak to resign in 2011.

The Tahrir Square was once called the Midan Ismailia. After the revolution in 1952, that made Egypt a republic from a monarchy, it got its present name. The Square has been the venue of demonstrations in 1881 against the Khedive Tawfiq and in 1919 against the British. In 2003, it hosted demonstrations against the War in Iraq. It has always been a popular place for demonstrations because those who oppose policies and governments take control of the center of Cairo.

The Liberation Square is located at one of Cairo’s main traffic intersections. It consists of a central grassy area surrounded by busy boulevards. Important institutions like the Egyptian Museum, the offices of the Arab league, the Nile Hotel, the National Democratic Party headquarters Building and the American University in Cairo are found near the square. It also has many souvenir shops and is the starting point of walking tours around the city. Visitors use the underground viaducts to get across the busy streets around Tahrir Square.

Why You Should Visit:
One of Cairo's largest squares, where you can enjoy a nice view of the city and some of the fresh air coming from the Nile.

Tip:
Surrounded by crowded roads so beware while crossing it from a side to another.
Image Courtesy of Flickr and David Evers.