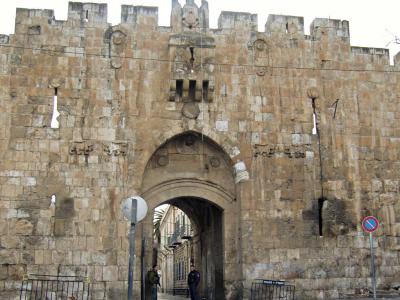 The Lions’ Gate takes its name after the pairs of stone animals carved into the design. Legend has it that sultan Suleiman the Magnificent, who built the wall around Jerusalem in the 16th century, had a nightmare in which he saw lions about to devour him as he had failed to secure defenses for this part of the citadel.

Waking up, he ordered a wall to be built with the lions placed at the city gate. There are speculations as to whether the carvings are actually lions and not panthers, in which case they may depict animals from the crest of the Mameluke sultan Baybars, and thus be part of an older building.

Another name for this point of entry is “Bab Sitt Maryam” and it refers to Mary, mother of Jesus. Legend has it that she has been laid to rest somewhere around the Kidron Valley. In Christian tradition and lore, this gate is also known as St. Stephen's, the first Christian martyr who was stoned to death. On a Palm Sunday, there is a procession recreating the historical route of Jesus from Scripture, passing through the gate from the Mount into the Old City.

The Arabic name for the gate is "Meshikuli", which in more modern terms means “wicket” – a small opening in a wall – through which, back in the day, people could watch those approaching and, in case of attack, pour boiling oil or tar onto the enemies' heads.

Why You Should Visit:
Impressive and incredibly well-preserved historic sight, considering it has never been restored!

Tip:
Can get crowded, especially on Fridays, because of the influx of Muslims coming for prayer at the nearby al-Aqsa Mosque.
Image Courtesy of Flickr and Hilary Perkins.