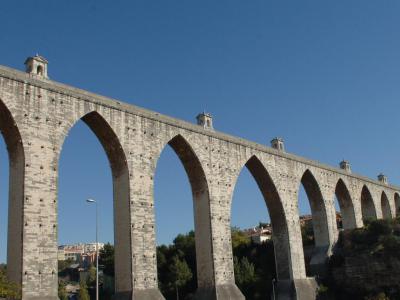 The Águas Livres Aqueduct ("Aqueduct of the Free Waters") is a historic aqueduct in the city of Lisbon, Portugal. It is one of the most remarkable examples of 18th-century Portuguese engineering. The main course of the aqueduct covers 18 km, but the whole network of canals extends through nearly 58 km.

The city of Lisbon has always suffered from the lack of drinking water, and King John V decided to build an aqueduct to bring water from sources in the parish of Caneças, in the modern municipality of Odivelas. The project was paid for by a special sales tax on beef, olive oil, wine, and other products.

Construction started in 1731 under the direction of Italian architect Antonio Canevari, replaced in 1732 by a group of Portuguese architects and engineers, including Manuel da Maia, Azevedo Fortes and José da Silva Pais. Between 1733 and 1736, the project was directed by Manuel da Maia, who in turn was replaced by Custódio Vieira, who would remain at the head of the project until around 1747.

Custódio Vieira conceived the centerpiece of the aqueduct, the arches over the Alcantara valley, completed in 1744. A total of 35 arches cross the valley, covering 941 m. The tallest arches reach a height of 65 m, and many are pointed, reminiscent of arches in Gothic style. It is considered a masterpiece of engineering in the Baroque period.

In 1748, although the project was still unfinished, the aqueduct finally started to bring water to the city of Lisbon, a fact celebrated in a commemorative arch built in the Amoreiras neighborhood.
Image by Pedro Ribeiro Simões on Flickr under Creative Commons License.
Sight description based on wikipedia