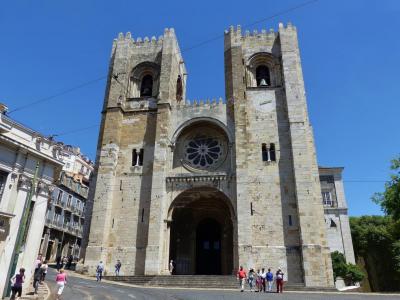 The oldest church in the city, first constructed in 1147, Santa Maria Maior was built on the site of a Moorish mosque after the conquest of Lisbon by Christian forces under King Afonso Henriquez, during which time the relics of St. Vincent of Saragossa, the city's patron saint, were brought from Southern Portugal and placed here, still remaining unmoved.

After suffering extensive damage during the many devastating earthquakes that rocked Lisbon, the present Cathedral was rebuilt in the 20th century giving the structure a predominantly medieval appearance, evident in the thick stone walls and fortress-like towers. This style is common with many Portuguese churches of the Christian conquest period, when they were used as military bases for launching attacks on enemy forces.

The Cathedral's interior is 'plain' compared to others you may see in different countries but still pretty impressive with its gothic arches and ceilings, plus sections of stained glass. Two noteworthy chapels are that of St. Ildefonso with a carved sculpture of one of the first Portuguese Ambassadors, Lopo Pacheco with a dog at his feet, and the chapel dedicated to Lisbon-born San Antonio de Padua. Archeological excavations in the courtyard have unearthed several objects from the Visigothic, Roman and Moorish periods.

Tip:
Free entry to the Cathedral and, for a few €s, you can also climb partway up the tower to the Treasury during the hours of 10am–5pm (note that it's closed on Sundays).