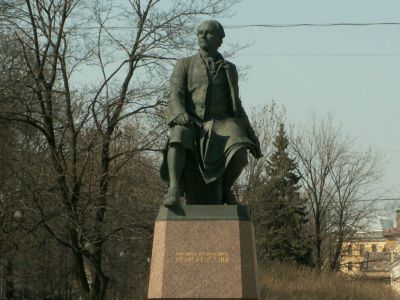 Located near St. Petersburg State University, at the intersection of the Mendeleevskaya Line and the university embankment, is the monument to Mikhail Vasilyevich Lomonosov.

Truly one of the great minds of his day, Lomonosov was a Russian polymath, scientist, naturalist, poet and lyricist, who made important contributions to literature, and education, as well as academic and applied sciences. Part man and part genius, he was a physicist, astronomer, chemist, historian, and mosaic artist. Some of his accomplishments include hypothesizing that Venus had an atmosphere, writing a book that helped to standardize Russian by combining Old Church Slavonic with the local language, being the first person to record the freezing of mercury, inventing sea tools that made calculating distances and directions easier, suggesting the existence of Antarctica, restoring the art of mosaics, and organizing an expedition to find the Northwest Passage.

Blended quite well into the surrounding landscape, the site for the monument was not chosen by chance – Lomonosov himself was a student of the Academic University, forerunner of the modern St. Petersburg University, and years later was appointed its rector. The monument was unveiled on November 21, 1986 to mark the 275th anniversary of Lomonosov which also coincided with the 250th anniversary of the Russian Academy of Science.

The three-meter bronze statue was designed by sculptors Valentin Sveshnikov and Boris Petrov; the red marble pedestal – by architects Igor Shakhov and Eduard Tyakht. Lomonosov is depicted seated with an open manuscript on his lap, seemingly a bit tired. His face is radiant with creative thought; it seems as if he is on the verge of a new scientific discovery. His gaze is fixed on the Neva River.

Since the opening of the monument, there has been a tradition to greet here freshmen upon their admission to the university by members of the local authorities and the university administration.
Image Courtesy of Wikimedia and LoKi.