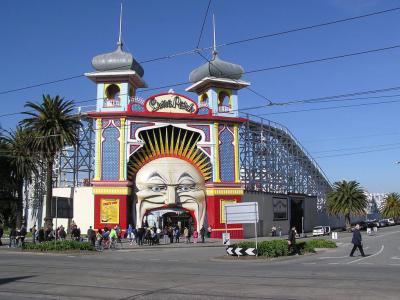 The premier amusement park of Sydney, Luna Park offers a range of enjoyable rides and activities for the entire family. It is located at Milson’s Point on the north side of the Sydney Harbour Bridge and offers spectacular views of the harbour.

Luna Park was first established at the foot of the Sydney Harbour Bridge in 1935. It was constructed by the same group of entrepreneurs and designers who built the Luna Park in Glenelg in South Australia. Initially, it was open for nine month seasons between and started functioning all year round from 1972. The park was renovated and rebuilt several times and the recent redevelopment and restoration took place in 2004.

Visitors are welcomed by a polyurethane smiling face of Old King Cole at the entrance of the park. The main thoroughfare called the Midway stretches from the face to Coney Island, the only 1930s type funhouse still running in the world. Other structures within Luna Park are the Big Top, a large auditorium where music concerts and other events take place, the Crystal Palace where weddings and social events are hosted and Maloney’s Corner where temporary rides are set up. Popular rides include a carousel, a flying saucer ride and the only HUSS ranger ride in Australia.
Image by Adam.J.W.C. on Wikimedia under Creative Commons License.