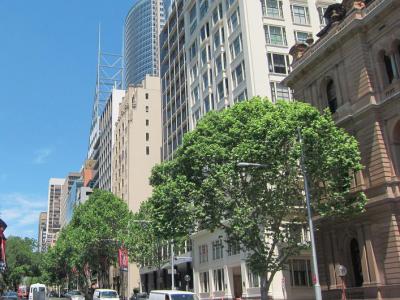 Macquarie Street is one of the most famous streets in Sydney's Central Business District. Some of the landmarks that appear along this street are Hyde Park and the Sydney Opera House. All of the major institutions for New South Wales are along this street as well.

Most of the buildings on this street date to the 19th and early 20th centuries. St. James Church, completed in 1824, the Sydney Hospital built in 1894, and the Sydney Conservatorium of Music building that dates to 1815 are highlights that stand out for many visitors. Hengrove Hall, from 1928 when it served as barristers' chambers, has an impressive facade. Another building famous for its facade is the Chief Secretary building.

Other important 19th century buildings are the Sydney Mint building from 1816, the former Treasury building from 1899, the Hyde Park Barracks from 1819, History House that dates to 1872 and is owned by the Royal Australian Historical Society. Early 20th century buildings include the 1930 British Medical Association building and the State Library that dates to 1910.
Image by Terrazzo on Wikimedia under Creative Commons License.