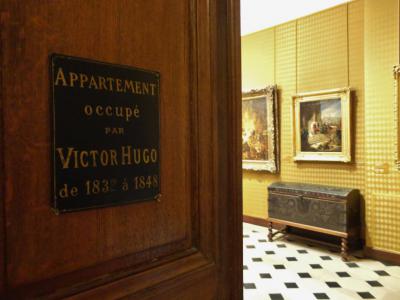 The museum of Victor Hugo in Paris, at Rohan-Guéménée Hotel in Place des Vosges, is actually just an apartment on the 2nd floor that the writer rented for 16 years, from 1832 to 1848, in which he wrote the bulk of his “Les Miserables” and other major works.

Apart from being a writer, Hugo is recognized as one of the greatest French poets who also made significant impact on classical music – based on his books are several operas including “Lucrezia Borgia” by Donizetti, “Rigoletto” and “Ernani” by Verdi, and “La Gioconda” by Ponchielli. Hugo was also a grand political figure, which together with his creative talents, had earned him much love and admiration of the Parisians during his lifetime.

The museum consists of several rooms, including antechamber, Chinese-decorated living room, Medieval-style dining room, and the reconstructed bedroom featuring the interior of 1885 in which Hugo passed away at the age of 83. Upon the announcement of his death, Paris mourned deeply seeing over two million people take to the streets to bid farewell to the writer at his funeral procession stretching from the Arch of Triumph to his final resting place at The Pantheon.

That procession is depicted in one of the paintings displayed at the museum alongside the sculptures, caricatures and other memorabilia collected by Hugo over the years.

On the first floor, there is a permanent exhibition of Hugo's drawings plus the iconography of his literary works. At times, there are also temporary exhibits presented there, too.

If you're a fan of Hugo and happen to be in the area, paying a quick visit to the museum is a great idea, as it is free to enter and doesn't take long to explore. For visitor's convenience, there is an audio guide in English which helps put into context all that is to see there.