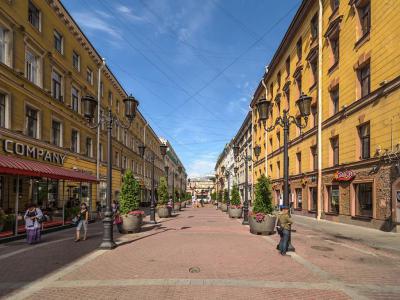 Malaya Sadovaya (Russian: Small Garden) Street is a pedestrian zone, running between Italian Street and Nevsky Prospekt. Spanning a block of about 175 meters (574 ft), it is the shortest street in St. Petersburg. Short as it may be, the street has no shortage of places to sit (cafes, terraces and a fountain) and take a break with a cup of coffee in hand or a bite to eat, and, perhaps, enjoy the view of some nearby sculptures and leisurely folk.

Upon its construction in the 1740s, the street was called New Lane (Russian: Novyi Pereulok), and was much favored by Emperor Alexander II as a walking venue. In 1873, it was renamed Catherine Street, after Catherine the Great, and kept this title until the Revolution of 1917. In September 1918, a number of streets and squares in the city were renamed, including this one, which became Proletkult (Proletarian Culture) Street. However, after World War II, most of the historical names of streets in St. Petersburg (then Leningrad) were restored. Thus, in 1949, Malaya Sadovaya Street once again emerged on the map.

In 1999 it was made a pedestrian zone: paved with tiles, sidewalk boundaries removed, and benches added, along with a fountain placed in the center, featuring a clock with a Kugel ball (a huge ball of marble – weighing 739 kilos! – freely rotating in jets of water).

More recently, several small sculptures have been added to the setting, including that of "Dog Gavryusha" in the courtyard of a house, and two cast-iron cats – “tomcat Elisey” and “cat Vasilisa” – placed respectively on the cornices of houses no.8 and no.3. Some of the passers-by attempt to throw coins at the cats for good luck, hoping that some of them will land nearby. Also, at the house no.3, there is a bronze monument of photographer Karl Bulla, whose workshop was once here.
Image Courtesy of Wikimedia and Florstein.
Sight description based on Wikipedia.