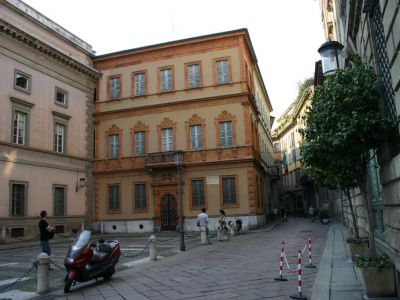 Situated in the heart of Milan, Casa del Manzoni (Manzoni Museum) is a magnificently elaborated ex-residence of an Italian author and poet Alessandro Manzoni. Born in 1785, he was second in Italian literature only to Dante. Manzoni died a tragic death when he fell down the steps of San Fedele in 1873.

Inside the house where Manzoni once lived, everything seems to be frozen in time. There is an evocative atmosphere inside the rooms. All Italian schoolchildren study “I Promessi Sposi” (The Betrothed) and “Il Cinque Maggio”. Author’s desk is still present in the very room where the author wrote some of the most significant works in Italian literature and where Manzoni met Garibaldi in 1862 and Verdi in 1868. Pictures, prints and souvenirs donated by collectors such as Pietro Brambilla are on display here.

Many important people visited Manzoni house including Garibaldi, Verdi and author Tommaso Grossi. The interior of the house is very well preserved. National Centre for Manzoni Studies has been opened here along with a large library including over 40,000 books and the complete work of Manzoni. The building also hosts the National Manzoni Studies Centre and the Manzoni Museum.

Manzoni’s hobbies included botany and gardening and the presence of beautiful gardens here was one of the reasons of him buying the house. Tommaso Grossi also had a studio in the Manzoni home and he lived happily there for a long time.

Casa del Manzoni is not just an outdoor museum; rather it is a masterpiece of architecture. Alive and stunning, it is an integral part of the monumental wealth of the city and treasure chest of great artistic significance.