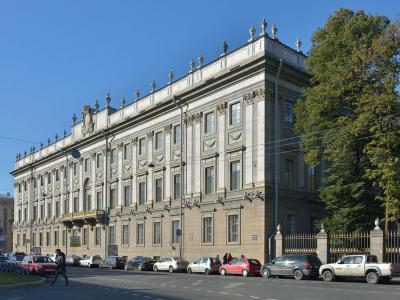 Marble Palace is located between the Field of Mars and the Neva River. Dubbed by many as “the only of its kind”, the interior and exterior of the property featured 32 different types of marble. Catherine the Great intended the palace as a gift for Count G. Orlov, one of her favorite friends. Architect Antonio Rinaldi built the palace from 1768 to 1785.

Unfortunately, Count Orlov did not live to see the glorious creation and the palace passed through a succession of royalty before becoming the property of the Soviet government in 1917. Much of the design was lost on the first floor when the Central Museum of Lenin was installed at the palace. The only items that survived were the Main Stairs and the Marble Room.

The museum is home to two impressive collections. The first collection is a compilation of over 500 items donated by the Rzhevskiy Brothers. It consists of 19th and 20th-century art (drawings, paintings, porcelain, and antiques), by artists Mikhail Nesterov, Mstislav Dobuzhinsky, Kuzma Petrov-Vodkin. The second set is the Ludwig Collection and features European, American, and Russian exhibitions from the Ludwig Museum.

An equestrian statue of Alexander III majestically greets all who pass through the courtyard.

Tip:
Pre-book a tour of the palace! It is during the tour that the more beautiful rooms are shown, which are closed to regular visits. The most important one – Marble Room – also has limited access.