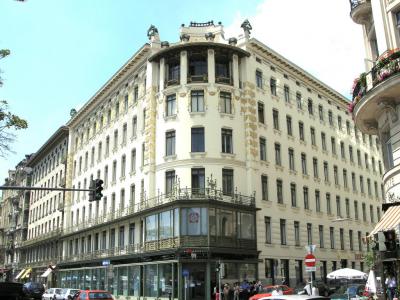 Known as the Medallion House because of its decor of gilded medallions by Wagner's student and frequent collaborator, Koloman Moser, this apartment block adjacent to the Majolica House on Linke Wienzeile was constructed by Otto Wagner in 1898-99 in the same Vienna Secession style.

As compared to the Majolica's design where green, blue and pink shades prevail, here gold is the master and the decorations adorn not only the front façade but – given that the building is on a corner – the length of the other sides as well. The roof, visible from far away, features several sculpted heads, called "The Criers", or "The Crying Women" by Othmar Schimkowitz, who provided sculpture for other Vienna Secession landmarks, including the angels topping the Postsparkasse building.

As one of Europe's prime Art Nouveau jewels, the Medallion House prominently features on a €100 gold coin. Today, it houses a branch of an Austrian bank.
Image Courtesy of Wikimedia and Gryffindor.