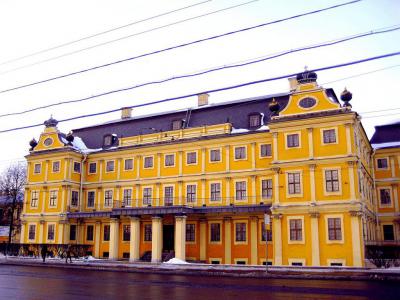 Menshikov Palace is a Petrine Baroque-style edifice situated on Universitetskaya Embankment of the Bolshaya Neva on Vasilyevsky Island, and is one of the oldest palaces in St. Petersburg. It is also the first stone building in the city.

Alexander Menshikov, the former owner of the palace, was a prominent Russian statesman and a close friend of Peter the Great. Although a commoner by birth, he eventually received the title of Serene Highness, became governor of Ingermanlandia, and achieved the rank of General Field Marshall. Unfortunately, Menshikov was also known for his deceitfulness, which eventually caused his demise.

Built as a residence for the then Governor General of Saint Petersburg, which is yet another title Menshikov held, the luxurious property reflects a combination of influences. The Dutch cobalt tiles, Italian marble, Russian stove tiles, leather, textiles, and tapestries decorate the palace interior in full splendor and perfectly accentuate the 17th- and 18th-century sculptures, paintings, and artwork displayed throughout the building.

The construction lasted from 1710 and was overseen first by the Italian architect Giovanni Maria Fontana, and, later, by the German architect Gottfried Johann Schädel. The palace opened for residents in 1711, whereas finishing works on it continued until 1727, when Menshikov and his family were exiled to Siberia and the property was confiscated.

Formerly the political, cultural, and social center for Peter the Great and his associates, the Menshikov Palace later housed the First Cadet Corps and, as of 1981, has served as a branch of the Hermitage Museum, showcasing a collection of Russian art of the late 17th-early 18th centuries. In addition, many of Menshikov’s belongings are also available for viewing.

Tips:
Check out the Dutch cobalt-tiled rooms – quite a site, well worth seeing.