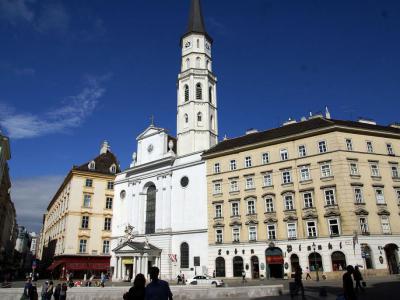 The oldest building on Michaelerplatz, and the source of its name, Michaelerkirche was first built in the 13th century, though the Neoclassical facade, added in 1792, somewhat obscures this fact. The high polygonal Gothic bell tower from the 16th century may be seen from far away, having become one of the Inner City's symbols. Above the entrance, on top of the pediment, resting on Doric columns, stands a group with winged angels and St. Michael slaying Lucifer (1725). These sculptural figures were executed by the Italian sculptor Lorenzo Mattielli, who also sculpted the Hercules figures at the Hofburg entrance, just opposite the church.

Inside, the church retains its plain Gothic origins, but sculptor sculptor Karl Georg Merville's "Fall of Angels" steals the show: a monumental stucco alabaster Rococo sculpture, tumbling from the ceiling above the high altar. The gilded pipe organ (1714) – Vienna's largest Baroque organ – is very fine; it was once played by the 17-year-old Joseph Haydn, who lived next door in a small attic room. The very first playing of Mozart's unfinished "Requiem" first took place here on December 10, 1791, in a requiem service for the composer. Just to the right of the church's entrance, you will find two dark reliefs commemorating said performance.

Off the north choir is the entrance to a huge crypt, discovered by U.S. soldiers in 1945, when they forced open its doors, which had been sealed for 150 years. Found lying undisturbed for centuries were hundreds of mummified former wealthy parishioners, clothed in their burial finery that was perfectly preserved by the rarefied air within.