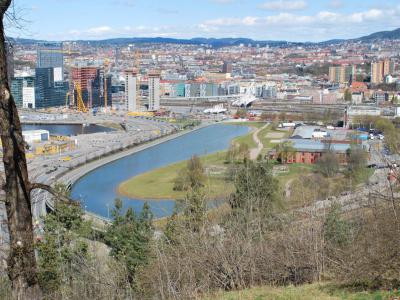 Middelalderparken is a park worthy of any Oslo walking tour. The park is known as the Medieval Park, which may seem ironic in that it wasn't opened until the year 2000. It gains its name not from the history of the park itself but for the landmarks that are located within.

Like many of the medieval ruins of Oslo, St. Clement's Church was excavated by Gerard Fischer. The stone church is thought to have been built around the year 1100. However, more than 80 burials were discovered beneath the church that have been carbon dated to the year 980. These burials are believed to be some of the oldest Christian burials in Norway.

St. Mary's Church was a stone church, possibly built in the 1200s, which was preceded by wooden, stave church constructed around the year 1050. During excavation, the remains of King Haakon V and Queen Consort Euphemia of Rugen were found. Those remains were removed to Akershus Fortress.

Oslo Kongsgard was the 11th century royal residential palace. It served in this capacity until Akershus Fortress was built.
Image Courtesy of Wikimedia and Helge Høifødt.