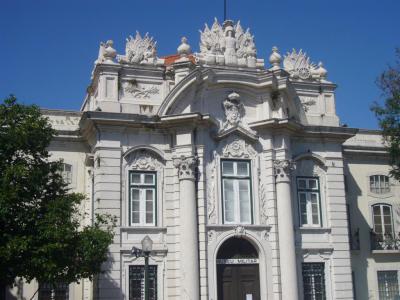 People often forget that Portugal had an enormous global empire for almost six centuries and this museum – although showcasing strictly the military side of things, i.e. artillery, arms, uniforms and military art – does give a good overview of the not so distant past. Founded in 1851 on the site of a 16th-century shipyard, it has an outstanding collection of model artillery – the world's largest. Until the early 20th century, the building was, in fact, a manufacturing unit for weaponry.

Notable among the exhibits is a sword belonging to Vasco da Gama and a 14th-century cannon. Many of the rooms have magnificent baroque interiors, tiled mosaics portraying various exploits of the Portuguese military forces through the ages from the Christian defeat of the Moorish rulers till WWI, and murals showing the historical voyage and discovery of the sea route to India. The 1st floor has many exhibits showing the services of the Portuguese as part of the WWI allied forces.

Why You Should Visit:
Important not only for its military-themed exhibits but also for the elaborately decorated rooms.
Surprises await you in each section, with numerous paintings, carvings and tapestry describing Portugal's history.
Ticket price is very reasonable and the route is quite easy to follow, with lots of exhibits you can touch along the way.

Tip:
From 10 to 12:30 on Saturday and Sunday mornings a martial arts club conducts training sessions for its members in European swordsmanship (two-handed swords, not fencing), in the museum's basement vaults. This is well-worth watching for people interested in martial arts, especially if they have any familiarity with fencing or kendo.