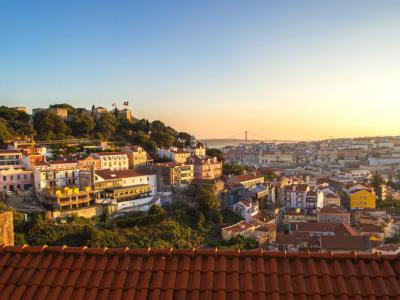 Although commonly referred to as Miradouro da Graça, the official name of this viewpoint is Miradouro Sophia de Mello Breyner Andresen, given after a poetess who spent many a day admiring Lisbon from this spot. Her bust keeps doing that, while the lines from one of her poems adorn the nearby wall. Unlike many other viewpoints in Lisbon, attracting mostly the tourist lot, this one in the Graça neighborhood is equally popular a meeting spot with locals, and a sort of spiritual refuge for those seeking to rest at the on-site café offering refreshments and comfortable sitting in the shade of the church and the surrounding pine trees, generously complemented with the stunning view of the city down below, the Tagus river flowing in the background, with the sounds of bustling metropolis drowned in tranquility.

This viewpoint is often the finish line for those walking up the hill from Alfama and the Castle of Saint George. En route to the terrace, visitors pass by a small garden with a small fountain and a bronze sculpture. A series of steps leading up to the viewpoint are paved with traditional cobblestone designs.

With the castle seen to the left, over the years, this view has proven a magnet for artists who flocked here in droves, anxious to capture the history of Lisbon on canvas or paper. The undoubtedly key sight meeting an eye here is one of the city’s oldest churches, Igreja da Graça, originally built in 1271 and revamped in Baroque style following an earthquake in 1755.

Its interior decoration is rich in grisaille paintings and gilded woodwork. The centerpiece therein – the image of Christ carrying the cross – is traditionally taken to streets for an annual Easter procession since 1587. The adjoining convent served as military barracks throughout the 19th century, and was opened to the public only in 2017. It has an elegant cloister and an interior mixing marble and a series of 18th-century tile panels.
Image Courtesy of Flickr and Lajoumard.