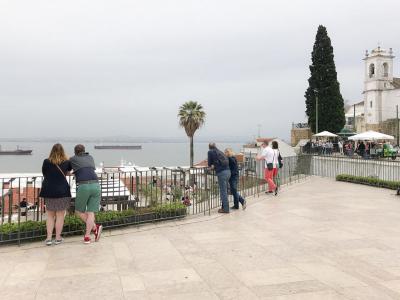 The Largo das Portas do Sol street in Lisbon derives its name from the old Porta do Sol (Gate of the Sun), which is part of the city's old Moorish fortification existed prior to and ruined by the 1755 earthquake.

The Gate was adjacent to the Church of São Brás of the Order of Malta, now commonly referred to as Santa Luzia, whose bell tower was built upon the wall that runs along the Adiça to São Pedro, between two ancient towers. The wall of the Gate, destroyed in the earthquake, was to be incorporated into the Castle of São Jorge, next to the Gate of Dom Fradique.

In the middle of the 18th century, in one of the tombs inside the churchyard of São Brás, a large stone cannonball was found, fired by the Moors at the defenders of Lisbon, led by D. Afonso Henriques, during the city conquest.

From the Portas do Sol, among other points of interest, you can observe the Church of São Vicente de Fora, as well as the whole of Alfama neighborhood, extending all the way down to the Tagus River. The viewpoint itself is a balcony-like space. In 1949, a statue of São Vicente, by the sculptor Raul Xavier, was installed here.

Tip:
For an ultimate fun experience, look for a flight of stairs and a WC sign. Go down the stairs and under an arch you will find a mural depicting Lisbon's history in a comic-book style. Nearby is the Museum of Portuguese Decorative Arts.
Image Courtesy of Wikimedia and Vernaccia.
Sight description based on Wikipedia.