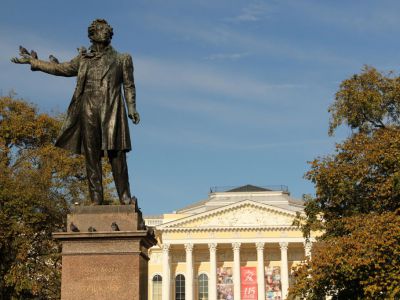 While there are several statues of Alexander Sergeevich Pushkin in St. Petersburg, the finest of them all, in many's opinion, is the one fronting the State Russian Museum in the center of Arts Square (Russian: Ploshchad Iskusstv).

This monument was created by sculptor M.K. Anikushin and architect V.A. Petrov and was inaugurated on June 19, 1957 to mark the 250th anniversary of the city. Then known as Leningrad, Russia's northern capital was, of course, founded in 1703, but the death of Joseph Stalin in 1953 delayed celebrations by a full four years.

The cast-bronze statue stands over 4 meters high and together with a red granite pedestal measures 7 m 90 cm. On the front side of the pedestal is the inscription carved in gold: "Alexander Sergeevich Pushkin".

In the process of working on the monument, Anikushin made a large number of sculptural and graphic portraits of the poet. Remarkably, but the magnificent sculpture seen today emerged after the state commission had already approved an earlier version. Anikushin nonetheless perceived that variant insufficiently illustrative of Pushkin's personality which, in his own words, was of “vivid character, straightforward in actions and clear in thoughts”. “I therefore tried to get rid of all the superfluous details, I wanted the figure of Pushkin to radiate joy," he said.

Pursuant to his determination, the sculptor, at his own expense, created a new variant that is currently in place, capturing the poet in motion, his head raised and his face beaming with inspiration. For this work, Mikhail Anikushin was awarded the Lenin Prize in 1958.
Image Courtesy of Flickr and Ana Paula Hirama.