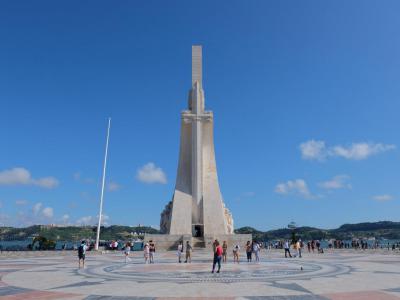 Monument to the Discoveries / Rosa-dos-Ventos, Lisbon

Designed as a temporary beacon for the 1940 Portuguese World Fair, the Monument to the Discoveries is one of the great symbols of Lisbon and a romantic idealization of the nation's past, celebrating those who took part in the Age of Discovery, or the Age of Exploration, of the 15th and 16th centuries, thereby dispelling man's fear of the unknown.

Located on the estuary of the Tagus river in Belém, wherefrom ships once departed to frequently unknown destinations, it consists of a 52-meter-high slab of concrete carved into the shape of the prow of a ship, with the side facing away from the river featuring a carved sword that stretches the monument's full height.

Brilliant views are abundant from the top observation deck (€5 fee). A good zoom is a must to capture the amazing city panorama: Tagus river, the '25 de Abril' bridge, the statue of Christ the King, Belém Tower, and the Jerónimos Monastery.

Tip:
Don't forget to also take a look at the "Rosa-dos-Ventos" at the base of the monument, consisting of a wind rose and the elaborate mosaics-laid map of the Portuguese world discoveries, with the nation's most important overseas possessions marked and bearing the date of the respective discovery. Even though it was not a part of the original monument, and was inaugurated 20 years later following the latter's opening, it looks and feels – thematically and aesthetically – as an inherent component and continuation. As one would expect, Portugal is at the center of the world!