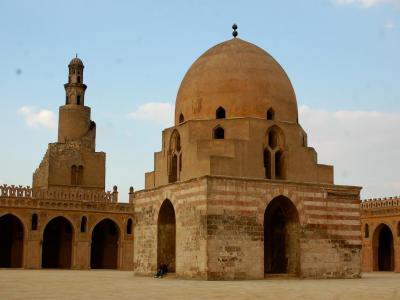 The Mosque of Ibn Tulun is one of the largest, oldest and best-preserved mosques in Egypt. Some scenes of the James Bond movie, 'The Spy Who Loved Me', were filmed here.

The mosque was built between 870 and 879 by the Abbasid Governor Ahmad Ibn Tulun. He was a slave who founded the Tulunid Dynasty that ruled Egypt between 868 and 905. After the fall of the dynasty, the mosque was neglected for many years. It was restored in 1296 by the Mamluk Sultan Lajin. A recent major restoration was carried out in 1999 and the courtyard was paved and the fountain was covered with black marble.

Ibn Tulun Mosque covers an area of 6 acres. It is the third largest Mosque in the world. The galleries have intricately carved stucco arches. It was the first time that stucco was used in Egypt. The unique feature of the building is the minaret. Unlike other minarets, it has a spiral structure. The model is from the minarets found in Samarra, Iraq. A spiral staircase is found on the outside. The minaret arches have a horseshoe shape resembling the type of arches found in Spain and showing the influence of Muslim refugees who fled here after the re-conquest of Spain from the Moors.

Why You Should Visit:
To see what many people agree is one of the most beautiful mosques in Cairo, besides being the oldest intact mosque in the whole of Egypt.
You can enter the mosque to soak in the atmosphere or you can ask the people working there if you could just climb the minaret (me'zana) to get an amazing view of the old city.

Tip:
Before climbing the stairs to the minaret, you can go to the top of the mosque (one set of stairs leads to both) and see the whole place from above.
If you do go inside, don't forget to tip the guy that's going to cover your shoes with pieces of cloth, so that you don't have to take your shoes off.
Image by Dan on Flickr under Creative Commons License.