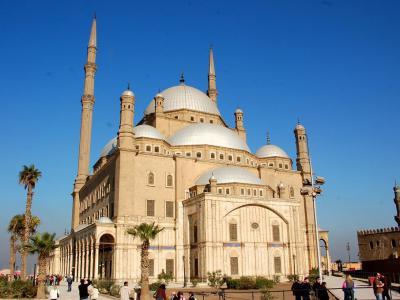 The Mosque of Muhammad Ali Pasha is located at the top of the Salah-ad-Din Citadel in Cairo. It is one of the most visited sites in Cairo.

The mosque was commissioned by the founder of modern Egypt and the last dynasty that ruled Egypt. It is also called the alabaster mosque because of the extensive use of the material in the structure. Unlike other mosques in Egypt that were built in the Mamluk architectural style, it had the style of Turkish Mosques especially the Yeni Mosque in Istanbul. It was designed by the Turkish architect, Yusuf Bushnak.

The Mosque of Muhammad Ali Pasha has a central dome surrounded by four small domes and four semicircular domes. The slender minarets have a Turkish architectural style and are 82 meters high. The tomb of Muhammad Ali Pasha is located at the center of the courtyard and is made of Carrara marble. The arcaded courtyard offers a spectacular view of the city across to the pyramids at Giza. The large prayer hall is covered by a large Turkish-style dome. The Southwestern parapet offers views of Cairo, the Sultan Hassan Mosque and the Ibn Tulun Mosque.

Why You Should Visit:
As part of the Citadel that you get to explore, this mosque stands out the most, especially at night with its beautiful illumination.
Add to this the design and intricacy of the mosaic inside, which truly makes it a great antiquity.
Because it sits on top of a mountain, you can also take in expansive views of the city and the pyramids.

Tip:
Try to go early in the morning or late afternoon to avoid the heat and go on a sunny day as well – makes a lot of difference when enjoying the view!
Be sure to ask the cost of the "tour guide" assistance before you agree to hear more about the mosque.
Image by Dan on Flickr under Creative Commons License.