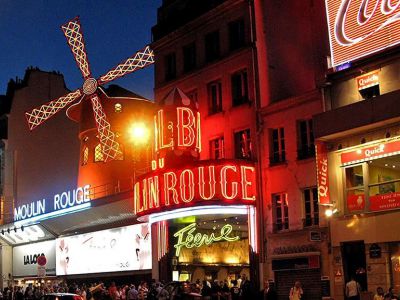 Moulin Rouge became a meeting place for Parisians and visitors from all walks of life. The uber-rich, society ladies, middle class, artists, and foreign visitors all rubbed shoulders in this elegant cabaret. The can-can dance was popularized here. Today, you can book a table, enjoy dinner and champagne, and take in a magical dance performance.

Over its 130 year history, Moulin Rouge has hosted countless celebrities and royal guests. In 1890, the Prince of Wales, the future Edward VII, came to the Moulin Rouge to see the new and riveting can-can dance. In 1891, artist Toulouse-Lautrec painted his first poster for Moulin Rouge.

Ginger Rogers performed on stage in 1979 for Moulin Rouge's 90th anniversary. Queen Elizabeth II attended a private show in 1981. Other members of the British royal family have visited the Moulin Rouge over the years, including Prince Edward, Princess Anne, Prince Charles, and Princess Diana.

The original building burned down in 1915. The re-build was completed in 1921. In 1951, the building had an intensive renovation, and this decor is in place today.

Moulin Rouge has been featured in countless books, plays, and films over the years. The 2001 film Moulin Rouge!, directed by Baz Luhrmann, re-popularized this vibrant and one-of-a-kind place.

Moulin Rouge has been the center of Parisian nightlife for over 130 years and has influenced entertainment across the world. See why celebrities, artists, and royalty are drawn to this one-of-a-kind entertainment scene.

Visit at sunset for photos of Moulin Rouge's windmill and neon signs lit up against a darkening sky.
Image Courtesy of Wikimedia and Steve.