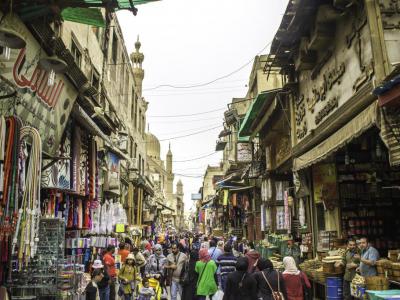 In the late 1990s, the city spent extensively rehabilitating the historical monuments and buildings along Muizz Street to make it an open-air museum. The street is pedestrian-only for most of the day, meaning it's a great place to walk and see many sights in one area.

There are more sites and attractions than you can count on Muizz Street. A UN study found that this one street has the most fantastic collection of medieval architectural treasures in the Islamic world. You'll find dozens of mosques, madrasas, and hamams, along with shops, restaurants, and markets.

Nearby Khan Al-Khalili Bazaar is a major souq (market) and is popular with locals and tourists. It's a great place to enjoy dinner or lunch and buy some souvenirs.

While all of the buildings along Muizz Street are architectural treasures, don't miss the Azhar Mosque, Cairo's first mosque built in 970. Also, visit Bab Zuweila, the medieval gate into the walled city, and one of Cairo's most important landmarks.

Visit the street in the evening to see the buildings illuminated with special lighting. The vibe at night is entirely different, with lots of street food and people enjoying the cooler air.

Many attractions and monuments charge an extra fee for bringing your camera.

Remember that weekends here are Friday and Saturday, and that's when you'll find Muizz Street and all of its attractions the busiest.
Image Courtesy of Wikimedia and Omar Attallah.