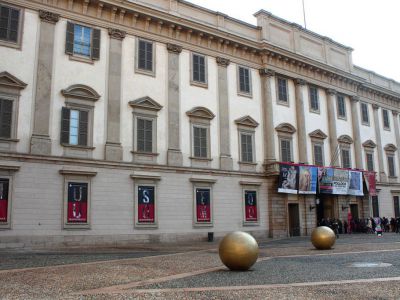 Housed inside the Royal Palace of Milan, the Grande Museo del Duomo di Milano preserves artifacts and works of art related to the Duomo Cathedral and those from the deposits of the Veneranda Fabbrica del Duomo (Milan Cathedral Factory).

The museum was inaugurated in 1953, although the idea to preserve the history of the Cathedral emerged in the penultimate decade of the 19th century. In 1948, the Veneranda Fabbrica obtained concession of nine rooms on the ground floor of the oldest wing of Palazzo Reale, formerly a Visconti-Sforza residence built by architect Giuseppe Piermarini in the second half of 18th century, thus safeguarding suitable site for hosting and exhibiting the treasured items, whose quantity largely increased following the damage caused by air bombings during World War Two. The deterioration of many works of art caused by atmospheric pollution, plus the arrival of new material from the Fabbrica's storages and sacristies of the Cathedral soon necessitated more exhibition space with special preservation and restoration facilities.

In the 1960s, the museum was expanded with another ten rooms granted by the Municipality of Milan. On 4 November 2013, on the occasion of the San Carlo Borromeo festival, the museum reopened after an extensive renovation.

The exhibition space of the Duomo Museum is divided into 26 rooms spread across an approximately 2,000 m², covering a total of 14 thematic areas. The strict chronological order of the exposition allows visitors to follow all the phases of the Cathedral's construction, starting from its foundation in 1386 to the 20th century, while exploring the works of art gathered there since the late 14th century. The large collection of sculpture is complemented by the invaluable stained glass windows, paintings, tapestries and embroidery, terracotta sketches and large architectural models.

Why You Should Visit:
Entry here is included in the Duomo ticket and the cool dark rooms also offer some respite from the heat of the city while you take in the beautiful pieces that make up the Cathedral's history. One of the major interest here is the magnificent 1:22 wooden scale model of the Duomo – a feat in itself!

Tip:
If you want more info in English, you can also rent an audio guide.