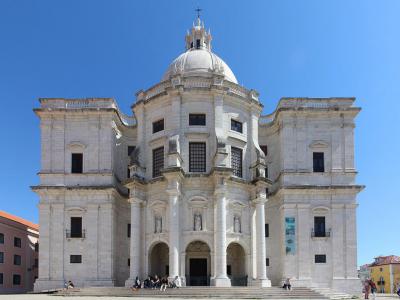 A 16th-century church with a 20th-century dome and many famous personalities buried in its crypts, Santa Engrácia has been declared Portugal's National Pantheon; a fitting place for explorer Vasco da Gama's cenotaph as ships from around world moor on the quayside below. There is no wait for the €4 per person entry, and visitors can climb the steps to the rooftop terrace that affords commanding 360-degree views of Lisbon and the harbor.

Despite destructive collapse and countless financial struggles, Santa Engrácia was finally inaugurated in 1966. Royal architect, João Antunes prepared an ingenious design for it, never before attempted in Portugal: a centralized floorplan with a Greek cross shape and a square tower on each corner (the pinnacles were never completed), while the façades are undulated similar to Borromini's baroque designs. The main façade has an entrance hall (galilee) and three niches with statues, entrance being obtained through a beautiful baroque portal with the coat-of-arms of Portugal held by two angels.

As befitting a self-respecting church, inside you will find a magnificent 18th-century baroque organ that was brought from Lisbon Cathedral and, of course, the floor and walls are decorated with baroque, polychromed patterns of marble. On different floors, there are small wooden balconies where one has a good view of the massive hall below.

Tip:
A flea market takes place on Saturday, so visiting on this day adds to the fun!