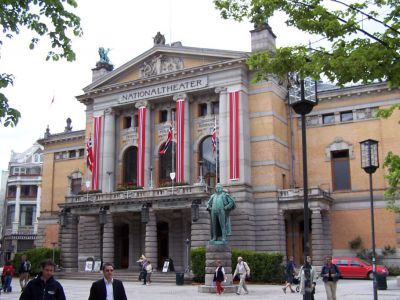 Oslo’s Nationaltheatret is located on Johanne Dybwads Plass, close to Karl Johans Gate, the city’s central shopping street. It is served by metro, tram and rail services at its eponymous station. Noticeable for its imposing columned facade, the theater has been a fixture of Oslo life since 1829, when it opened as the Christiania theater. It has existed in its current form since 1899, when the building was opened with a three day festival.

The center piece of the grand opening was the performance of the Ibsen play Enemy of the People. Henrik Ibsen, arguably Norway’s greatest playwright, saw the vast majority of his works performed here, including his internationally acclaimed play A Doll’s House. This was during the theater's golden age, when a combination of government funding and the work of artistic director, Vilhelm Krag, established the theater as the biggest and best in Norway. The theater now contains three separate performance areas – the main stage, the amphitheater and the painting parlor. There is also a sister theater in the Torshov district of Oslo.

Operation hours: Monday - Friday: 9.30 am - 6 pm; Saturday 11 am - 5 pm.
Image by Cnyborg on Wikimedia under Creative Commons License.
Sight description based on wikipedia