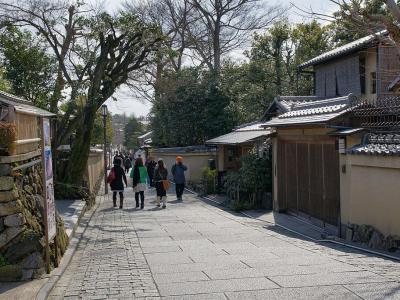 Nene-no-Michi (The Path of Nene), Kyoto

Nene-no-Michi Lane is a path that runs by Kodai-ji Temple, and is named for the widow of the warlord Toyotomi Hideyoshi, who was known as Nene. The temple was found by Nene herself, hence the name of the path. Pretty much a pedestrian-only zone, this path is a perfect place for a stroll and gets particularly picturesque in spring when the cherry trees are in blossom, which in turn also makes it just as crowded. At this time, amid the ambling masses of tourists you can meet many people wearing kimonos and yukatas, creating the feel of ancient Japan.

This flagstone walkway passes by many important sights in the Southern Higashiyama area, linking Ninen-zaka and Sannen-zaka with the Kodai-ji Temple and Maruyama-koen Park along the way. One of its highlight attractions is the Gionkaku tower of the Daiun-in Temple – a somewhat queer looking structure resembling a wooden float like the ones used in the Gion Festival.

Tip:
Normally closed to the public, the Gionkaku tower is open in summer, but do remember to check online if it is indeed open before going. The 36-meter tall tower offers a spectacular view, but no photos are allowed, unfortunately.
Along the Path of Nene there are many signs and lanterns with the words “Nene no michi” written in Japanese. Taking a photo at such signs is a popular joyful activity.
There are also a number of Buddha statues allowed to be touched, so feel free to do that. Among them there is one of Hotei, a Buddhist figure with a big belly. See if you can find it!
Image Courtesy of Wikimedia and 663highland.