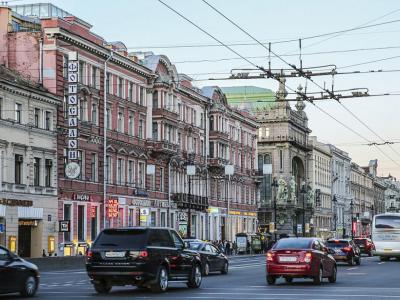 Nevsky Avenue (Russian: Nevsky Prospekt) is the main thoroughfare of Saint Petersburg where most of the city's shopping and nightlife occurs. The street takes its name from the Alexander Nevsky Lavra, the monastery at the eastern end of it, which commemorates the Russian national hero, Prince Saint Alexander Nevsky (1221-1263).

The avenue was planned in 1703 by Peter the Great as the outset of the road to Novgorod and Moscow. Today it is listed as a UNESCO World Heritage site. Major local attractions include the Rastrelliesque Stroganov Palace, the grand neoclassical Kazan Cathedral, the Art Nouveau Bookhouse, Elisseeff Emporium, half a dozen 18th-century churches, a monument to Catherine the Great, the Great Gostiny Dvor – enormous 18th-century shopping mall, the Passage – a mid-19th-century department store, the Russian National Library, the Alexandrinsky Theatre, and the Anichkov Bridge with its horse statues.

The feverish life of the avenue was described by Nikolai Gogol in his story "Nevsky Prospekt" published in 1835. Fyodor Dostoevsky often employed Nevsky Prospekt too as a setting in his works, such as Crime and Punishment (1866) and The Double: A Petersburg Poem (1846).

During the early Soviet years (1918–44), the name of the avenue changed several times: first and briefly to "Proletkult Street" (Russian: Ulitsa Proletkul'ta) and then to "Avenue of the 25th of October", alluding to the day of the October Revolution. None of these, however, took on in the daily language of the locals who kept using the old name.

During the German siege of Leningrad in 1941–1944, some walls on the north side of Nevsky Prospect were stenciled with warnings for passers-by: "Citizens! During shelling this side of the street is the most dangerous". One such inscription is now a war memorial. After the siege was lifted in January 1944, the name “Nevsky Prospect” was officially restored and has remained ever since.
Image by Ninara on Wikimedia under Creative Commons License.
Sight description based on wikipedia