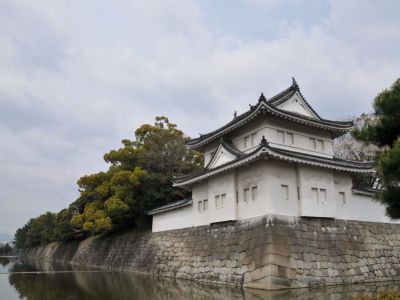 The magnificent Nijo Castle is the former residence of the Tokugawa Shogunate. Opened to the public in 1940, this is one of the few palaces in Kyoto where visitors are allowed to view the interiors.

The castle was built in 1603 by Tokugawa Ieyasu, and was later enlarged by his descendant, Tokugawa Iemitsu, who added a five-floored tower, called Honmaru, which was later destroyed by fire. Nijo was also the site where the last Tokugawa Shogun, Yoshinobu, restored to power Japanese Emperor in 1867.

Unlike other palaces, the Nijo Castle is not fortified but, instead, is surrounded by gardens and a moat. The complex comprises two structures: the outer Honmaru tower, and the main building and residence of the Shogun, called Ninomaru. The unique feature of Ninomaru is its squeaking floors, aka “nightingale floors” (uguisubari). The noise made by the floor planks, when walked upon, was to warn residents about someone entering the building. The interiors of the castle abound in beautiful paintings and sliding doors. There are also wax mannequins dressed up in ancient costumes so as to recreate the ambiance of a historical royal residence. In 1994, the Nijo Castle was declared a UNESCO World Heritage Site.

Why You Should Visit:
To experience first-hand the Shogun's lifestyle, to see where official ceremonies and meetings took place, and so on.
Truly amazing gardens outside, with a tea-house and an indoor food/drink/souvenir rest area.

Tip:
Make sure to wear socks, as you will be required to take your shoes off to explore the interior.
Consider renting audio guide headphones for some valuable info that will help you understand the history of the complex better.
Otherwise, consider joining the English language tour running daily at 10am and 12:30pm.

Opening Hours:
Daily: 8:45am-5pm (admission until 4pm); entry to Ninomaru from 9am-4pm
Closed: Tuesdays in Jan, Jul, Aug, Dec (or the following day if Tuesday is a national holiday), Dec 29-31
Image Courtesy of Wikimedia and Reggaeman.