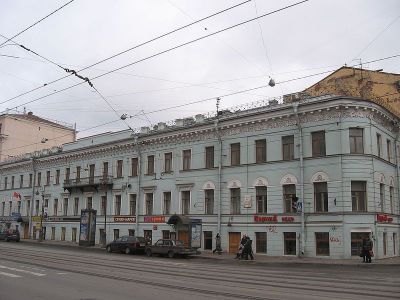 36 Liteiny Prospect is where Nikolai Alexeevich Nekrasov, one of Russia's most distinguished poets, spent the last 20 years of his life, from 1857 until 1877.

During his time at Liteiny, Nekrasov also used his apartment as an editorial office of two of the country's most progressive magazines of the second half of the 19th century: Sovremennik [“Contemporary”] conceived and first published by Pushkin; and Otechestvennye Zapiski [“National Notes”]. It is said that "the history of these rooms is the history of literary relations of an entire era, the history of Russian journalism." Indeed, all the top names of the Russian literature of the post-Pushkin period, such as Ivan Turgenev, Leo Tolstoy, Alexander Ostrovsky, Fyodor Dostoevsky, Mikhail Saltykov-Shchedrin, and many other prominent poets and writers had visited here.

The museum opened in 1946. Presented here are Nekrasov's personal belongings, rough copies of his manuscripts and final version of handwritten verses and poems, as well as first editions of printed publications and photographs alongside illustrations and portraits of the poet made by famous Russian artists – Ivan Kramskoy and Konstantin Makovsky.

Following a 1985 restoration of the rooms occupied by Nekrasov's co-editor and great friend – Ivan Panaev – a so-called "Panaev's half" has been established. Another part of the museum is dedicated to Andrei Kraevsky, a prominent writer, publisher and publicist who also happened to be the last owner of the property in which the museum is located.