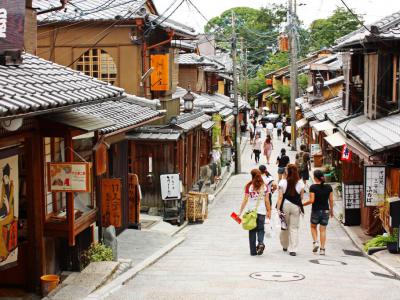 The Ninen-zaka & Sannen-zaka are two parallel streets in the Historical Preservation District of Kyoto. They retain the environment of old Japan with traditional Japanese wooden houses flanking a stone paved street.

The Ninen-zaka means Two Year Hill & Sannen-zaka means Three Year Hill. They are located at the foot of the Higashiyama Mountains. The streets are popular with tourists because they are located near famous Kyoto landmarks including the Kiyomizu Dera Temple, the Kodai ji Temple and the Yasaka shrine. Visitors also come to pay homage to the famous Japanese portrait artist, Yumeji Takehisa whose house is located here.

The shops that line the streets sell traditional arts, crafts and products like incense sticks, fans, textiles, candles, confectionary, souvenirs and intricate tableware. Some of the houses are restaurants and tea houses where weary tourists and shoppers can rest their feet. The two streets are steep slopes and can be difficult for some visitors to climb. The Ninen-zaka & Sannen-zaka Streets give visitors a sense of what streets were like during the Haien era in Kyoto.
Image Courtesy of Wikimedia and Andrea Schaffer.