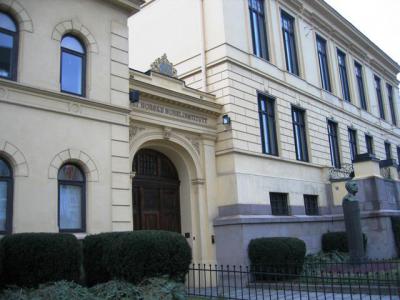 The Norwegian Nobel Institute is am elegant stone clad building in the centre of Oslo. It is situated next to the Royal Palace, and opposite the U.S. Embassy. It was established in 1904, a year before Norway achieved full independence, and is the administrative centre for the Norwegian Nobel Committee. The committee is a five-person panel, comprised only of Norwegian citizens, that award the Nobel Peace Prize each year.

Whilst it is widely acknowledged that the prize is named after Swedish inventor Alfred Nobel, a lesser known fact is that it was Nobel who posthumously created the award. His will donated money to the Norwegian government to create a committee, and award an annual prize for the promotion or advancement of world peace. Notable recent winners of the prize include Mikhail Gorbachev, Nelson Mandela and Barack Obama. Other Nobel awards are given out by the Swedish government, again under instruction from Nobel’s will.

The institute also houses a library, comprising a staggering 180 thousand volumes, all related to peace and international relations. The building also contains an extensive research facility which is visited by scholars from across the globe. Seminars and lectures on international development and relations are also held here, including the renowned Nobel Symposia – invitational debates attended by some of the world’s most distinguished scholars and public speakers.
Image by Hans A. Rosbach on Wikimedia under Creative Commons License.