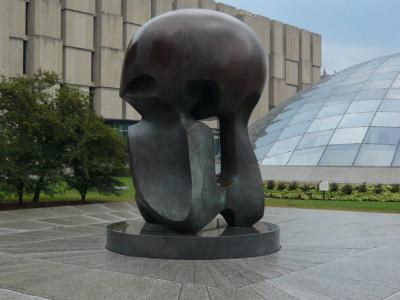 Nuclear Energy is a bronze sculpture by Henry Moore on the campus of the University of Chicago at the site of the world's first nuclear reactor, Chicago Pile-1. The first human-made self-sustaining nuclear chain reaction was created here on December 2, 1942.

Nuclear Energy is on Ellis Avenue, between the Max Palevsky West dormitory and the Mansueto Library in the Hyde Park community area of Chicago. It sits on the very spot where the Manhattan Project team built a nuclear reactor to produce the first self-sustaining controlled nuclear reaction, under the now-demolished west stands of the old Stagg Field.

The site of the first nuclear reaction was designated as a National Historic Landmark on February 18, 1965. Along with three other Chicago locations, it was one of the original places included when the National Register of Historic Places (NRHP) launched on October 15, 1966. The site was named a Chicago Landmark on October 27, 1971.
Image Courtesy of Wikimedia and Just.
Sight description based on Wikipedia.