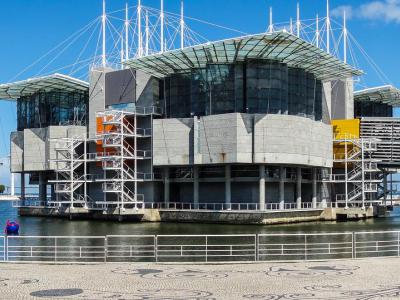 To celebrate the cultural relationship of Lisbon and Portugal with the sea, the Oceanarium was built for the World Expo in 1998. It is dedicated to teaching the public about aquatic creatures and their conservation.

The Oceanarium’s conceptual design, architecture, and exhibit design was led by Peter Chermayeff. It is said to resemble an aircraft carrier, and is built on a pier in an artificial lagoon. Chermayeff is also the designer of the Osaka Oceanarium, one of the world's largest aquariums, and many other aquariums around the world. The Lisbon Oceanarium has a large collection of marine species — penguins, seagulls and other birds; sea otters (mammals); sharks, rays, chimaeras, seahorses and other bony fish; crustaceans; starfish, sea urchins and other echinoderms; sea anemones, corals and other cnidaria; octopuses, cuttlefish, sea snails and other mollusks; amphibians; jellyfish; marine plants and terrestrial plants and other marine organisms totaling about 16,000 individuals of 450 species.

It has a 1000 square meter tank that extends around the center of the main floors. Surrounding the main tank are four tanks representing four habitats, the North Atlantic, the Antarctic, the Temperate Pacific and the Tropical Ocean. Though acrylic walls separate the tanks, the Oceanarium is so designed that all the creatures appear to be swimming together. An unusual creature is the sunfish that is usually difficult to preserve indoors, because of their unique and demanding requirements for care.

Sounds of the ocean are played as visitors walk through the observation rooms giving a restful ambiance. Guided tours are conducted including a backstage tour that shows visitors how an Oceanarium works.

Why You Should Visit:
Great to see marine animals living as if they were side by side and none of them seeming threatened by others.

Tip:
Buy the ticket online to skip the queue... and, if you want to avoid crowds or dealing with kids screaming/running around, get there near to opening time.
If looking for a stop to get off your feet for a bit, be sure to check out the public hammocks in the small park that precedes the entrance.
There is a very good view of the Vasco da Gama bridge from outside the aquarium and also until 5pm there are cable cars with outstanding views.