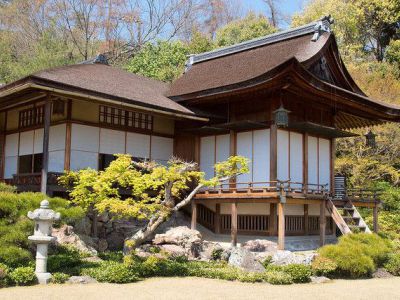 Located in Arashiyama, Kyoto, the Ōkōchi Sansō (literally "Okochi Mountain Villa") is the former home and garden of the Japanese period film actor Denjirō Ōkōchi. The villa is open to the public for an admission fee and is known for its gardens and views of the Kyoto area. Several of the buildings are recorded as cultural properties by the national government.

The grounds of the villa encompass approximately 20,000 square meters and feature multiple buildings, including a Japanese style home, tea houses, and shrines, located amidst carefully maintained Japanese gardens. They were built up over a period of thirty years by Ōkōchi to function as one of his residences but were eventually opened to the public after his death in 1962. The main structures were built in the 1930s and 1940s except for the Jibutsudō, which is a Meiji Era building that was moved to this site. The various gardens were designed to show off each of the four seasons. Since the villa is located on top of a hill, the city of Kyoto, Mt. Hiei, and the Hozu River gorge are well visible from points on the grounds.

Why You Should Visit:
Worth the entry price for a much calmer, less crowded area among the bamboo groves and for the scenic views.
Admission includes a cup of matcha green tea and cake in the tea house.
There are plenty of sitting areas inside or outside of the tea house to relax.